There are several factors putting certain people and populations at a greater risk of contracting COVID-19, having a severe illness, and even dying. The information coming in from the pandemic includes among these groups people with intellectual disabilities. This information is relevant to children and adults with cerebral palsy. Not all people diagnosed with cerebral palsy have an intellectual disability, but many do. 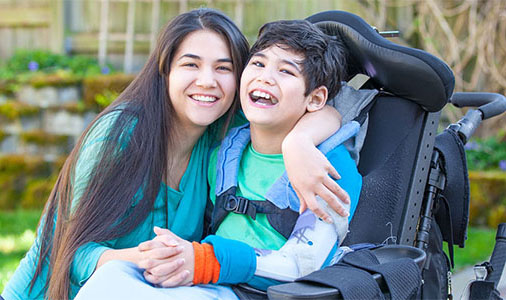 Cerebral palsy is a complicated diagnosis that includes a number of symptoms, disabilities, and associated conditions. Some people are intellectually impaired, while others have average or above average IQs. Studies indicate that around 45 percent of people with cerebral palsy have an intellectual impairment.

An intellectual disability with cerebral palsy is also associated with a higher rate of other, more severe symptoms: epilepsy, quadriplegic motor impairment, later walking, and an inability to walk, as well as more hospitalizations.

Studies of cases in Pennsylvania and New York are showing that people with intellectual disabilities are much more likely to contract and die from COVID-19. In Pennsylvania, disabled people are dying at twice the rate, while in New York the fatalities in this population are 2.5 times higher than in the general population.

Another study looked at medical records for a group of over 30,000 people diagnosed with COVID-19. Of those, nearly 500 had developmental disabilities. The fatality rate for this special population was 4.5 percent, compared to 2.7 percent for the general population. This increased rate held true for people between the ages of 18 and 74. There was no difference in younger or older populations.

Why COVID-19 is Worse for the Disabled

Many physical and medical risk factors for severe or fatal COVID-19 are easy to understand: compromised immune system, heart disease, advanced age, and cancer. However, it’s not quite as clear why someone with an intellectual disability would be at a greater risk.

One reason is that people with these disabilities also have higher rates of medical conditions and physical disabilities as compared to the general population. A preexisting health condition makes them more vulnerable to COVID-19, as it does for anyone without an intellectual disability.

Another issue is that people with these disabilities are more likely than anyone in the general population to live in a group setting. Depending on the severity of cerebral palsy and intellectual disabilities, an individual may not be suited for independent living. They may need to live in a group home or assisted living facility. This puts them at a greater risk of contracting a communicable disease from staff and other residents.

Deaths from COVID-19 in nursing homes have gotten more attention, but this is a similar phenomenon. People already more vulnerable to infection are living in groups where germs and disease can spread easily.

The coronavirus outbreak has been devastating to many, especially certain populations. It has, however, shed light on forgotten people, those living in nursing homes and similar facilities. It has brought greater awareness to problems like low staffing, low staff pay, inadequate protective gear, and others. Advocates hope this tragedy will lead to better care in the future.